The Project is underexplored, encompasses and is near several historic gold showings, and is easily accessible via logging roads. The terrain is well known to the Company which has extensive experience conducting exploration in the region. The Company’s work programs have led to gold discoveries at Cameron and Rowan lakes and in Richardson Township at what is now the producing Rainy River Mine.

This is a region the Company and its shareholders know very well, having explored there extensively and having discovered and developed significant projects such as the Cameron Deposit (now owned by First Mining) and the Rainy River Mine (now operated by Newgold) – for both deposits the Company conducted work programs that led to maiden resource estimates.” The Dash Lake Project is well located in relation to regional structures controlling gold mineralization and provides excellent exploration potential.

The Dash Lake property comprises nine (9) mining claims (consisting of 121 cells) encompassing 24.5 km2. It is located in the Kakagi-Rowan greenstone belt of the Wabigoon Subprovince approximately 50 km NW of the town of Fort Frances. To the west the claim group straddles the contact of the Sabaskong Batholith a known locus of gold mineralization in the area, and to the east the property abuts the Helena-Pipestone Lakes Fault that controls numerous gold occurrences locally.  The property is little explored, underlain by mafic to felsic metavolcanic rocks and mafic to felsic intrusions.  Numerous historic gold occurrences are situated near and on the Property demonstrating a range of mineralization style and grades.  The occurrences derive from historic work programs conducted between 1984 and 2011 and include the Hook Bay occurrence where diamond drilling returned 31.1g/t Au over 1.35m, the Dash Lake occurrence where grab samples returned assays up to 6.2g/t Au, and the Bethune occurrence with grab samples up to 30.6 g/t Au. At the Dash Lake South occurrence, located on the property, grab samples obtained from a pyrite mineralized felsic intrusion returned numerous anomalous grades up to 2.88 g/t Au. All data is obtained from the Ontario Mineral Deposits Inventory available at www.geologyontario.MNDM.gov.on.ca. The Cameron Deposit is located 24km to the north and the Rainy River Mine is 38km to the SW. 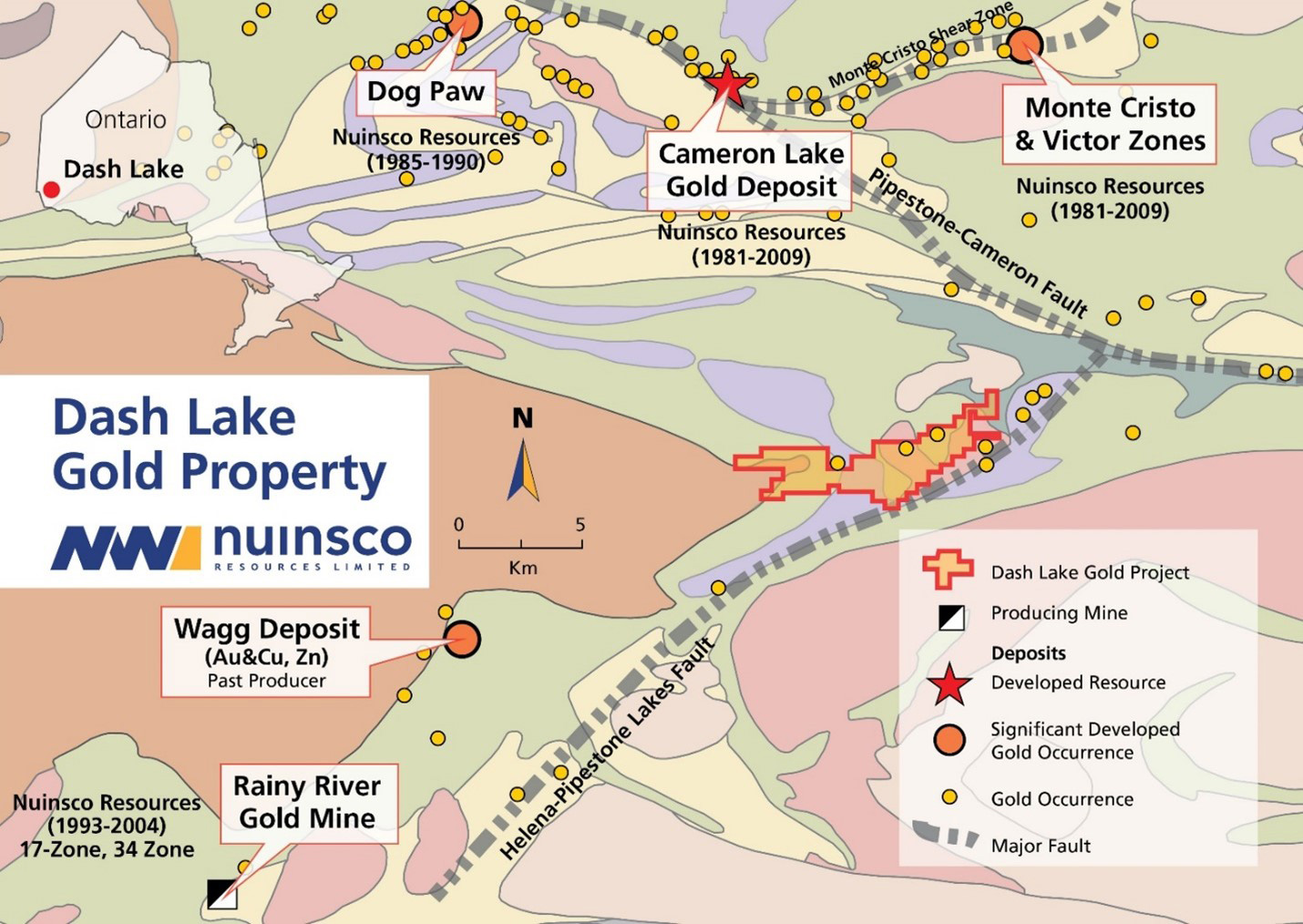